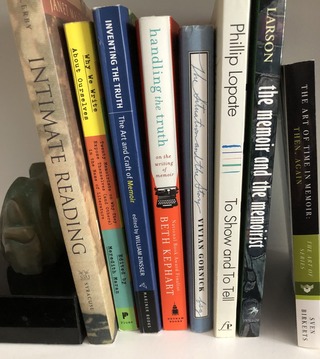 When I began thinking about writing in the first person, I turned to books by memoirists to find out why and how had they written memoirs. Now that I've finished writing my own memoir, Word for Word: A Writer's Life, I want to share them with others.

The first book I read was William Zinsser's Inventing the Truth with essays by Annie Dillard, Frank McCourt, Toni Morrison, Eileen Simpson, and five other memoirists. Evidently, their experiences didn't discourage me.

Next was Vivian Gornick's slender little The Situation and the Story, which made it very clear that I had to discard a biographer's distance when writing a memoir. "The situation is the context or circumstance…the story is the emotional experience that preoccupies the writer," she stated.

"Memoirists step carefully from one emotionally charged fragment to another as they explore the psychic geographies of their pasts: the persecutors, the traumas, the betrayals, the secrets, and the shame, but also, thankfully, the love," wrote Janet Mason Ellerby in her fascinating Intimate Reading.

After meeting Tom Larson in New Mexico, where we were both teaching at a writer's conference, I read his The Memoir and the Memoirist, where he developed Virginia Woolf's concept of the "I-then and I-now," the way an older self reflects on a younger self in memoir.

Then there was Sven Birkerts's The Art of Time in Memoir, in which he explained that memoir is "the artistic transformation of the actual via the alchemy of psychological insight, pattern recognition, and lyrical evocation." It seeemed like the ultimate challenge to me, but one I was willing to attempt.

Listed alphabetically, these and other books about memoir are:

The Situation and the Story: The Art of Personal Narrative by Vivian Gornick (2001)

Handling the Truth: On the Writing of Memoir by Beth Kephart (2013)

The Memoir and the Memoirist: Reading & Writing Personal Narrative by Thomas Larson (2007)

To Show and To Tell: The Craft of Literary Nonfiction by Philip Lopate (2013)

Why We Write About Ourselves: Twenty Memoirists on Why They Expose Themselves (and Others) in the Name of Literature edited by Meredith Maran (2016)

Inventing the Truth: The Art and Craft of Memoir edited by William Zinsser (1998)