How to Read to Write 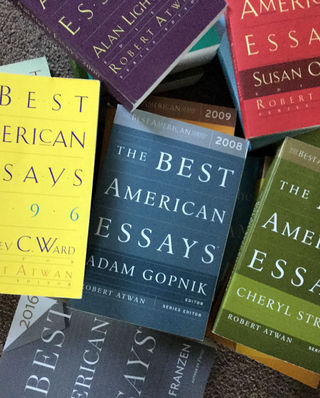 When I picked up a copy of The Best American Essays of 1996, it was when my third book had just been published, and I was looking for new ideas and inspiration--so it was exciting to find myself reading the richness of what I call verity.

Now one of my bookshelves holds 22 volumes of the series in a rainbow of colors, including a thick white one, which was guest edited by Stephen Jay Gould in 2002, and a slim orange one edited by poet Mary Oliver in 2009. Was it a matter of a poet turning up her nose at entries or a nonfiction writer throwing his arms around them?

Over the years I've read essays by both famous and obscure writers, which were first published in well-known magazines, like The New Yorker, and little literary magazines, like ZYZZYVA. Among the wide range of styles and subjects I discovered the writing of Patricia Hampl in the gray 1999 volume and the work of Lauren Slater in the pinkish-peach 1997 one.

I've found wisdom, too. In the 2004 robin egg's blue edition, Louis Menard wrote that a writer has to wait for "something inside you to come up with the words. That something, for writers, is the voice...What writers hear, when they are trying to write, is something more like singing than like speaking...the voice inside, when you find it, which can take hours or days or weeks, is not your speaking voice, it is your singing voice--except that it comes out as writing."

My love of the essay has been affirmed by series editor Robert Atwan's forewords about the genre, including in The Best American Essays of 2018. Observing the long list authors of almost included essays in the back of each edition occasionally become included authors, has allowed me to dream about sometime being among them.