When It's Called Fake, Watch Out! 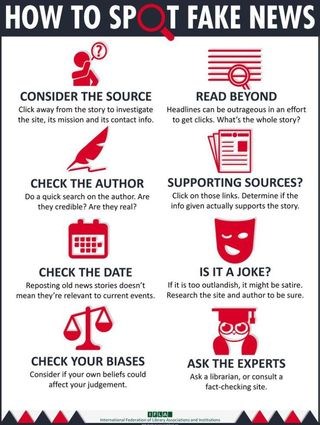 Calling factual information "fake" is very dangerous. It's a way of undercutting what is real with what is not. It's a way of discrediting and dismissing opinions we disagree with. It's even been called a new global evil by the Pope.

The fact is that some things are true and some are false. If they are confused, our democracy will become more and more paralyzed because lawmakers will be unable to agree enough to pass legislation. And news stories in the national press will not be believed.

"When a figure in power reflexively calls any press that doesn't suit him 'fake news,' it is the person who should be the figure of suspicion, not the press," Jeff Flake, Republican Senator from Arizona, stated recently, obviously about Trump.

Whether it's the president, Russian trolls, or friends and other people posting or tweeting unreliable information, it's our responsibility to find out whether it's true or fake. It's a matter of reading further than a headline, and clicking away to investigate the reliability of the author or news source. Let's try!