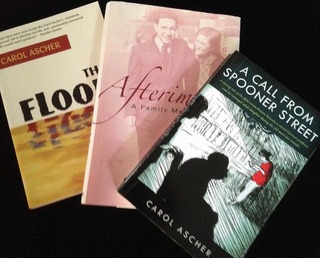 Carol Ascher, my friend and neighbor in Sharon, Connecticut, has written in the genres of fiction and memoir, and she answers my questions about the differences between them.

You've written a memoir about your father and two novels with a father figure? Why did you use non-fiction and fiction when writing about this topic?

My father was so important to who I am as an intellectual, aesthetic, and political individual, and since our relationship ended in a violent break shortly before he died, I've written about him three times.

The first time was in The Flood, about a ten-year-old girl in a refugee family in Kansas in 1951, an "autobiographical novel,"
in which I described my father as accurately as I could, including his work as a psychoanalyst at the Menninger Clinic, his love of German literature, and his immersion in music. I used the fiction form to streamline facts about my family as well as to make up scenes.
The second book was a memoir, Afterimages, about growing up with refugee parents. Though the memoir describes some of the same conflicts as The Flood, it covers a longer expanse of my childhood. I tried to analyze how my father's exile on American soil made him a discontented, sometimes bitter man, liable to angry outbursts.

In the second part of the memoir, I described a long research stay in Vienna, Austria, where he had lived until 1938. Since he had been largely silent about his past, I wanted a richer sense of his first thirty-three years--his childhood during World War I, his youth and university studies during the interwar years, and his early professional life during the beginning of Nazism.

Most recently, I again turned to fiction in A Call From Spooner Street, the most completely a work of the imagination of the three. My father banished me when I was twenty-four, and I decided to use fiction to imagine how a refugee a little like my father and a woman something like me might have reconciled had we been given the extra decades. I think of the project as my way of healing myself.

Imagination and verity exist in all the narratives but to what degree?

In fiction you invent your environment, characters, and the conversations between them. In memoir your environment and characters are given to you. Of course, narrative solutions to writing a memoir can include invented conversations--though one risks the trust of a reader if one uses them too often. In both memoir and fiction, the sequence of the narrative, the style, the tone, and many other imaginative decisions are entirely up to the writer.

How did your research methods differ?

In memoir you have particular family names to look up, whereas in fiction you can make up a biography for your character and then look up whatever you need to create veracity. But in both cases, I used archives, libraries, and got sufficiently acquainted with the environment I was going to write about to be able to do so convincingly.

Which was more difficult to write and why?

Afterimages was the most difficult because it took a long time for me to find a form and tone that would work. Also, I was working full-time while writing it. I went back to Vienna several times to check things as well as to make peace with a city and country that after Hitler's invasion had been so cruelly efficient at getting rid of its Jews. Ultimately I made friends there, which enabled me to write about the Holocaust without undue bitterness.

How should a writer decide whether to write about a topic as a memoirist or a novelist?

One of the important issues is your sense of privacy. Some people, or some topics, seem to demand the distance of fiction. Ironically, this very distance can give one the space in which to get closer to one's desires and feelings.