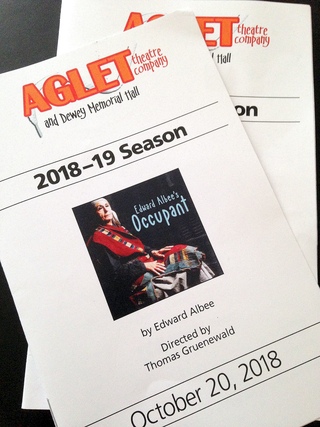 When I recently saw a production of "The Occupant," a play by Edward Albee performed by the Aglet Theatre Company, it was an experience of deja vu. After all, The Man in the drama interviews Louise Nevelson, which is exactly what I did in reality while working on my biography, Louise Nevelson: A Passionate Life.

Like The Man, a stand-in for Albee, I found it challenging to discover the truth about the artist. Indifferent to my search for facts, she was elusive about her turbulent and fascinating past, which began in Tsarist Russia and ended at the pinnacle of the New York art world.

So I examined what she erased or elaborated and took note of her unambiguous actions. I also looked at her sculptures, since she admitted she was working on her autobiography when she constructed Bride of the Black Moon from a rough plank and adorned it with a black crown. And when she created First Personage, a double figure suggesting highly fragile composure and barely restrained aggressiveness.

At times petulant or patient during our interviews, she was absorbed in her latest work-in-progress. After I turned off my tape recorder at the end of our last interview, she eagerly showed me what looked like another self-portrait--a black box illuminated from within filled with little fragments of black wood.

None of this was in the play, which was like more a conversation the playwright wished he had had with the artist, but never did.