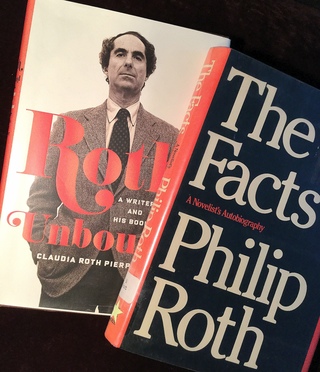 When Philip Roth's The Facts: A Novelist's Autobiography was published two decades ago, I immediately bought it. While I liked many of his novels, as a writer of nonfiction I also yearned for some veracity from him. His imaginings could be head spinning--he even wrote a work of fiction with a protagonist named Philip Roth!--so I yearned for some truthfulness.

Roth lived in a nearby village in northwestern Connecticut, and I sometimes sighted him doing errands or at classical music concerts. He radiated intensity, whether looking in my direction or at musicians on stage. Something about his fierce dark glance made me keep my distance.

Recently I reread The Facts again while working on my own memoir. What did it tell me? The book that called itself an unconventional autobiography told me I could uninhibitedly TELL as well as show, two writerly tasks. In its way of playing with mirrors, it encouraged me to imagine and interpret and play around with structure while sticking to the facts.

It was also when I read Claudia Roth Pierpont's fascinating biography, Roth Unbound: A Writer and His Books, again drawn to reality. At a book event I had the chance to ask Roth a question from a safe distance when she called him on a speaker phone. Recently, as he reached the age of eighty, he had said he was not going to write any more books, which had shocked me. I thought that writers never retire.

"Why have you stopped writing?" I asked him.

"Well, I'm not going to get any better," he said. It was a reply that brought me face to face with the fact of mortality, and the realization that even a writer as driven as Roth would one day have to stop. And now he is gone, but his fantasies and facts will live on.  Read More
Post a comment
Loading…}