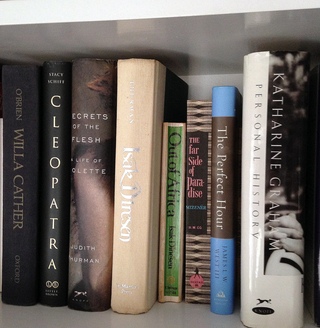 Just because I've given up writing biography doesn't mean I don't like to listen to biographers, so last week I went to hear three of them--Judith Thurman, Edmund White, and James Atlas--on a panel called "Biographers' Tales" in New York.

One observation about their subjects that stayed in my mind is that a writer's fiction is often more truthfully autobiographical than a memoir. Since I have written biographies of artists, this was a new thought for me.

The other is that the laborious work of biography only eases up by the last draft, after a biographer has gotten to know his or her subject so well that it's possible to write off the top of one's head. I agreed with that.

Judith Thurman has written lively, lengthy biographies of Isak Dinesen, best known for Out of Africa, and French novelist Colette titled Secrets of the Flesh. James Atlas's The Shadow in the Garden is an account of being a biographer, and Edmund White is known as the prize-winning biographer of French writer Jean Genet.  Read More
Post a comment
Loading…}