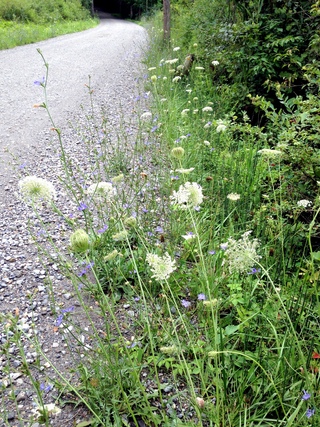 One of the ways I shake words loose is to go for a walk. By myself. With a pen and pad in my pocket. Along a country road taking me under trees, around bends, beside brooks, up and down hills, and alongside green fields.

The rhythm of putting one foot in front of another has a way of loosening thoughts from the depths of the mind. It's a matter of slowing the mind down to the pace of footsteps and distracting it from a to-do list.

Now in high summer the white Queen Anne's lace and blue Bachelor buttons are abundantly blooming in patches of sun along the roads, but every month in New England brings different blossoms and foliage.

Walking and thinking is an ancient practice. It was originally noted by a Greek philosopher, then written down in Latin as solivitur ambulando,meaning "it will be solved by walking." Many American writers have walked and written about its benefits, notably Henry David Thoreau in Walking (1861).

I almost always return from a walk feeling a little lighter, mentally as well as bodily, and with a pocket full of scrawled notes.  Read More
Post a comment
Loading…}